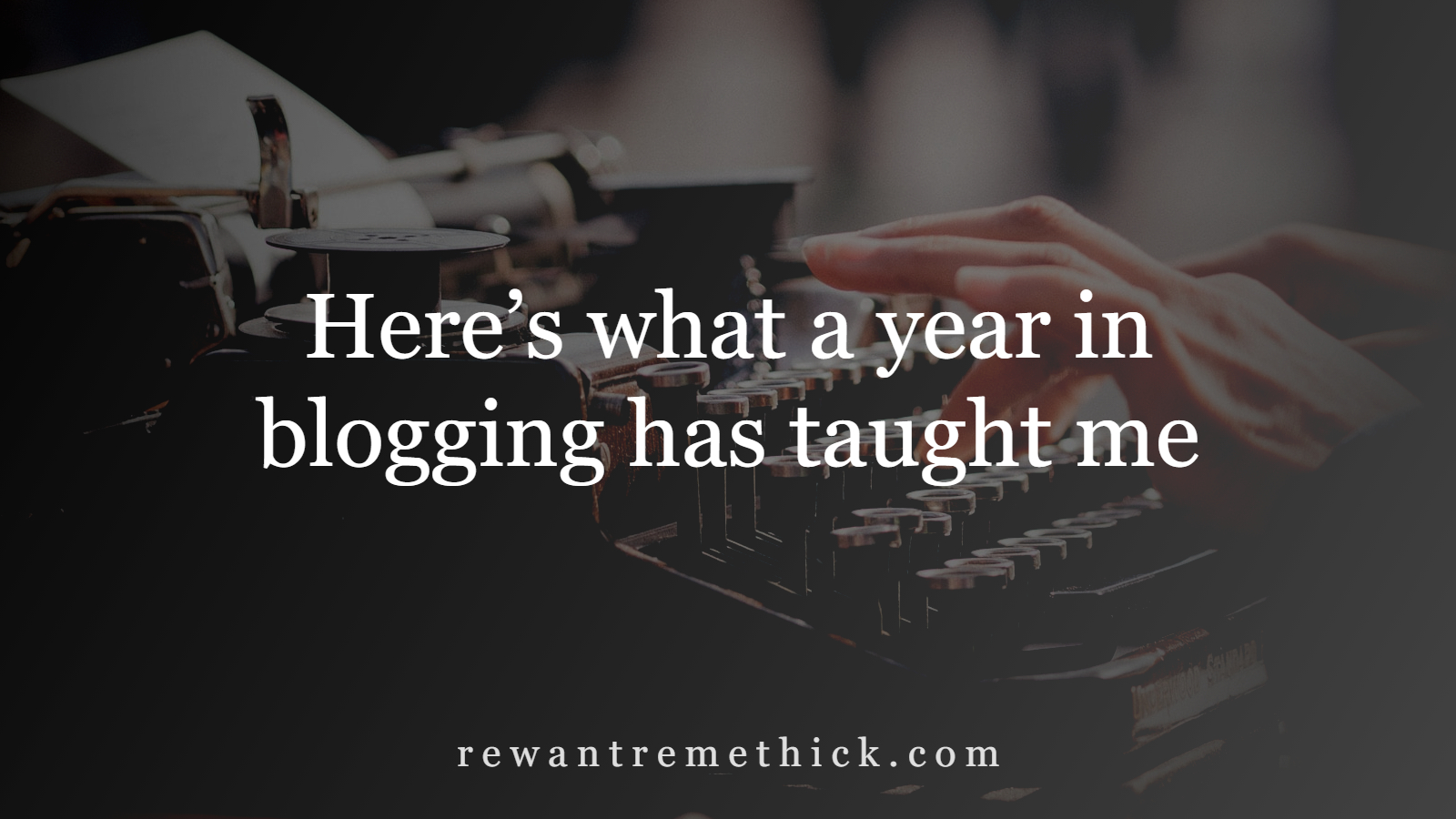 It’s kind of funny trying to write this, because the perfectionist in me keeps screaming things like ‘But nobody even reads this blog!’ But that perfectionist and his ridiculously high standards is the reason that most of my other projects have amounted to nothing.

True, none of the ‘wisdom’ I’m about to lay down will help you get views or subscribers or monetise your blog to the point where you can buy a Jeep. But there’s plenty of that out there already.

So, while I may not have that kind of insight, I’ve still learned plenty after my first year of blogging. Including:

A classic perfectionist problem is to over-assume. Your boss asks you to give a presentation on your work and, instead of delivering the quick 5 minute slideshow they were expecting, you deliver an hour-long epic complete with sock puppets, Medieval re-enactors and a short-lived lion taming session in which the VP of Finance loses a finger.

This happens because we don’t have a handle on concepts such as ‘good’, ‘adequate’ and ‘acceptable’. For us anything less than blowing peoples’ expectations out of the water is classed as total failure.

I’m not aiming for that kind of blog. Yet.

This is why my previous attempts at blogging failed. I thought blogging must mean posting at least once a week, commenting on hundreds of other people’s blogs, spending hours on Twitter, writing guest posts, and so on. It had to be all about the metrics: likes, comments, subscriber growth, views.

These things are important – if your goal is to start and build a popular blog. This where the second point in the list above comes in: think about what success means to you personally.

Say I was starting this blog while back at university. Managing to post something every week, and spending hours networking and engaging with my community, would be hugely achievable, given that I was swimming in spare time and had few responsibilities.

The idea of posting something and getting no views or interactions would seem like a bigger fail than the learner driver who crashes into the local zoo within the first minutes of their test and turns to the examiner, as another escaping lion scrambles across the car’s roof, and asks, ‘That’s not a major, is it?’.

For me, starting a blog and building an audience are two very separate things. Why? Because I have always struggled with a core element of blogging: consistency.

I have lots of things demanding my attention, and I always used to fall into the same pattern with each new blog I tried to get off the ground. At first I’d be super motivated and easily manage to write and publish something for the first three or four weeks. Then something would happen elsewhere in life that would demand my attention and I’d miss a week.

I’d tell myself it was fine and that I could just pick it up again in a few days’ time, but deep down I’d already be panicking. Because I’d missed a deadline. And that would, paradoxically, make it harder to write the next post, and very quickly things would fall apart, like a pop group when the only member who actually possess any musical ability decides to quit.

So when I found myself once again with the urge to start a blog, I knew I wanted to do it differently this time. I took a step back and thought about it critically. I asked myself what assumptions I was making about what ‘blogging’ actually looked like to me.

I realised that all I really needed to achieve in order for this to be successful was to be able to post regularly. Sticking to a schedule was important, but in the past I’d assumed that schedule had to be the generally-accepted one post per week. But posting once a month was still a schedule.

Once I realised that once a week wasn’t the only option, I quickly decided that once a month was a good target. While taking a few hours out each week to work on a blog post was difficult, finding that time each month was much more doable. But it still felt like a good target; if I couldn’t manage just once a month then clearly I needed to go back to the drawing board.

This is the ‘divide and conquer’ bullet. Future Rewan can worry about building an audience and generating engagement (although hopefully Future Rewan will have a Robot Assistant who can do some of this for him while he’s busy enjoying his hover boots). Right now, none of that matters if I can’t manage to post on a regular basis.

It’s a personal blog. The goals should be personal too.

I’m well aware that there are many yardsticks against which you could compare this blog and it would fall short. My viewer numbers, for instance, are smaller than the number of coins in the Pope’s Swear Jar.

But that doesn’t matter. Getting zero views on a post would be a massive failure for an established blogger with a ton of fans who had built themselves an active community. But that’s not me. All I need right now is to keep a blog alive. That’s something I’ve never managed before. Sometimes the folly is not in aiming for the wrong thing, but in aiming for the right things in the wrong order.

So being successful at blogging as far as I’m concerned is simply to be able to sit here a whole year after I started and to still be at it. And what’s even better is that I exceeded my original target of one post a month by almost 50%.

Trying to succeed on other peoples’ terms, or applying the same success criteria to myself as to people much further along their journey than I, never got me anywhere. You have to figure out what’s appropriate for the stage of the journey you’re at.

Not there yet, but going in the right direction.

It’s too early to say for certain that I’ve cracked the consistency thing. I need more than a year of blogging under my belt before I’m comfortable ticking that particular item off the obstacle list.

But, as long as I remember to keep challenging my assumptions, measuring success against my own personal strengths and weaknesses, and breaking down the challenges into smaller tasks, I know this blog will persevere.

And then one day I’ll find myself well-equipped to face those bigger goals, like building an audience and turning this into a platform that will serve me on my journey to becoming a published author.

What about the last point, I hear you ask? Well, that’s simple. I reckon it’s a common fear that we all share: the idea that our best isn’t good enough. But when it comes down to it, would I rather try my best and fall short, or not try at all because I might fail?  Definitely the former. After all, if we all adopted the latter as a philosophy, it’d be pretty hard to achieve anything.