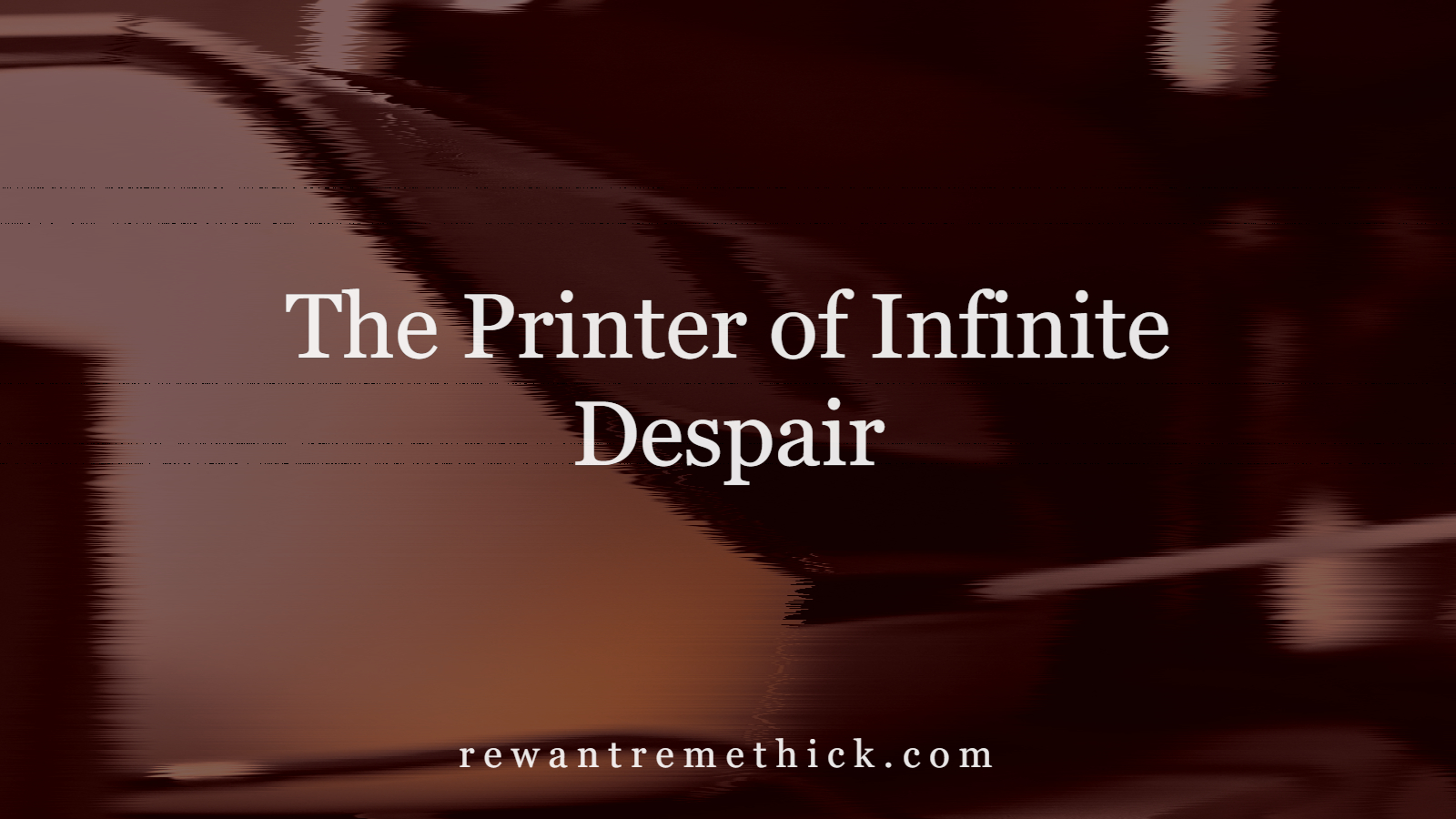 Even the howling storm outside could not cover the guttural cry of rage that tore through the Castle of Dread. Inside, the Elock-Tarr – foul creatures born of their master’s near-limitless power and twisted imagination – cowered in fear and gripped each other tightly.

Another mighty bellow shook the black stone walls of the abominable fortress, and a voice, deep and powerful and infused with a hatred that stung the ears like bile burns the tongue, rose above the storm.

Of the many cracked and slender towers that prickled the rooftops of the Castle of Dread, one stood by far taller and sharper than the others. Usually ravens, the size of cars and with eyes of flame, circled its thorny crown. This night they had fled before the shrieks and cries of their master. Only the bolts of purple lightning hurled about by the storm seemed to dare to venture close.

Inside, at the very top of the tower, was the office of the Dark Lord Eyzarok.

On its door was a sign, which read: For requests about time off, please see Carol in HR.

Pure destruction lived on the other side, as well as a cat called Ian. Today the chambers of the Dark Lord were even more ruinous than usual. The great throne had been tipped over, the Portal Mirror of Jiroth thrown to the floor and smashed. Candles black and thick as arms littered the floor, many of them crowned by pools of splattered wax.

The desk remained standing. On the desk was the Wand of Fyrrion, the Spellbook of the Dead and Damned, and a human skull. Positioned between them was the Laptop of the Dark Lord. Next to it was a printer. It had a sticker on it saying ‘Just because we’re evil doesn’t mean we need to waste paper. Think Before You Print!!’

The Dark Lord Eyzarok loomed over his desk, his spiked black armour rattling as his body trembled with barely-contained fury. His gauntleted hands gripped the edge of the desk so hard the wood was beginning to crack.

Gradually, his breathing slowed. Eyzarok allowed his taut muscles to relax, and his mind dispelled the growing magical aura that had been building around him; power ready for him to draw upon should he wish to melt the computer or throw the desk across the room with a mere thought.

When he judged himself calm enough, Eyzarok risked another glance at the screen. There was a notification in the middle of the display.

It said: Printer not found.

There was even a helpful red exclamation mark in the notification box, because nothing calms the mind more than feeling like your computer is scolding you.

Eyzarok tried to rub his eyes, only to remember, as his gauntlets scraped across metal, that he was still wearing the Helm of Infinite Knowledge. Clearly the makers of the helmet had never had to print out a utility bill.

“I mean who even gets paper statements anymore?” Eyzarok demanded.

Ian the cat, languishing in a bed custom made from the bones of Eyzarok’s greatest enemies, lifted his head slightly and fixed Eyzarok with one of his gleaming golden eyes.

“I can send them the PDF right now,” Eyzarok continued. He snapped his fingers, adding, “Like that.”

He navigated through the settings of his computer, cursing at the effort to double-click the mouse while wearing the Gauntlets of Blood.

“It’s right there!” He said, jabbing a finger at the screen. “It’s listed under ‘Devices’.”

Ian blinked, then went back to not saying, “Biscuits?”

Eyzarok stared out of the window. He watched the purple lightning stab at the mountaintops and the rain-swollen rivers foam their way down the craggy slopes.

How had it come to this, he asked himself as he watched a clump of rock tear away from the mountainside and roll ponderously into the valleys below. The man who had single-handedly slaughtered the upstart mages of the College of Gyrr. Who had routed the legendary armies of the Imperial Cities.

A knock at the door rumbled around the room. Eyzarok sighed, then called, “Enter”.

The door opened and one of Eyzarok’s Elock-Tarr entered. The demon was man-height, his head bristling with horns, his skin as red as flame and his teeth sharp and yellow.

The demon bowed, then licked its lips nervously.

“You, er, are having some trouble with your printer, my lord?” He asked.

“My laptop has failed me,” he said. “It recognises not the device despite both being being connected to the WiFi.”

The demon edged further into the room.

“I see,” he said. “Have you tried updating the drivers?”

Another demon poked its head around the door. It spied the headless body of its co-worker and swallowed.

“Fix this abominable machine!” Eyzarok boomed, touching the tip of his blood-soaked blade against the demon’s throat.

“Of course, my lord!” The demon squeaked, scurrying over to the laptop.

His taloned fingers clattered against the keys. He scowled at the display.

“It’s there under the list of devices,” he said.

“I know!” He shouted. “But when I command it to print it tells me it’s unavailable.”

The demon noticed the utility bill on the screen.

“You’re trying to print that?” He asked. “Who needs a paper copy of that?”

“Exactly! Surely even the most wretched pit fiend knows it’s all paperless in this age?”

“I suppose you’ve tried calling their helpline?” The demon asked.

“Indeed, and after five minutes of automated menus it bade me head for the internet, assuring me the answers to my questions would be there, then hung up on me.”

“I see. And what did the internet say?”

“To call the helpline.”

“And everybody says we’re the villains,” the demon said.

“Can you fix it?” Eyzarok demanded.

The demon clucked its tongue.

“I’d suggest we try connecting via a cable,” he said. “Do you have a compatible one?”

“Ahh,” Eyzarok said softly. “The Nameless Cable. The rarest of all the forms; square at one end and…normal at the other. A true conduit of power. I would slaughter entire kingdoms to posses one.”

“They come with the printer,” he said. “You must have lost it. Just like you lost the Sword of Revelation.”

He had but a second to claspe his hand over his mouth before Eyzarok’s blade severed both neck and wrist. The demon’s hand tipped forward onto the keyboard with a clatter.

Eyzarok lowered his blade and stared at the notification on the screen. His breathing, already deepened by rage, now quickened with excitement.

He reached for the mouse, but another movement caught his eye. The demon’s head was beginning to slip from its neck. Eyzarok watched, rooted to the spot by fear, sensing what was about to happen yet unable to move in the face of the inevitable.

The demon’s head tipped forward then landed on the keyboard, its pointy nose pressing down heavily on the keys.

Eyzarok remained frozen, not daring to look. Eventually he raised his eyes to the screen. There was another notification.

Printer unavailable. Would you like to update the drivers?

Even the howling storm outside could not cover the guttural cry of rage that tore through the Castle of Dread. Inside, the Elock-Tarr cowered in fear and gripped each other tightly. Only Ian the cat felt calm, curled in a ball on his bed of bones, his tongue lolling out, dreaming of biscuits.

A voice, deep and powerful, rose above the storm.

About this short story

This is actually only the second piece of short fiction I’ve written in a very long time. Most of my writing energy and time has been focussed on my various novel projects.

This story was inspired by a question asked on Twitter by The Broken Binding bookshop. They wanted to know what everyday situations we’d like to see more of in science fiction and fantasy. There were lots of great responses, and after putting forth my suggestion of a Dark Lord struggling to connect a printer, I found myself wanting to see how that would play out.

And while you’re at it, give me a follow as well: @RewanTremethick

Cover image and corresponding social media tile is based on a photo by Robbin Wong on Unsplash.

3 thoughts on “Short Story: The Printer of Infinite Despair”