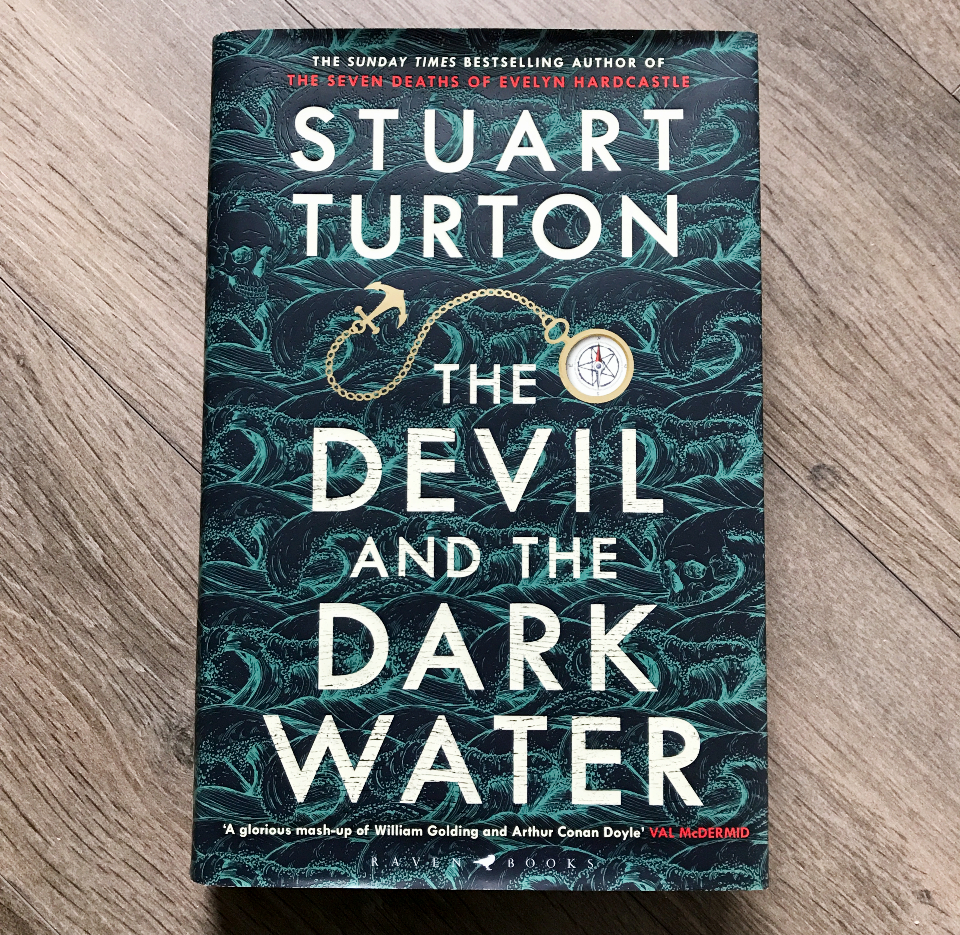 Stuart Turton was facing a mammoth task when he sat down to write his second book. It was a labour of his own making: his debut, the Seven Deaths of Evelyn Hardcastle, was a massive hit. Rightly so. The main character has to body hop and time travel in order to discover the secret to an unsolved historic murder.

It was wildly imaginative and brilliantly written. And so whatever came next from the writer was under a lot of pressure to deliver.

The Devil and the Dark Water certainly does. In spades.

But before we go any further, let’s just pause to appreciate the hardback edition, shall we? This is a signed copy I bought from Waterstones (this is only my fifth blog post – ain’t no way anyone’s sending me free books any time soon). Look at those page edges. It’s just showing off.

The year is 1634. A fleet of seven ships sets out from Batavia, heading for Amsterdam. Aboard the Saardam is a grizzled cast of characters, the imprisoned world-famous sleuth Sammy Pipps, and, possibly, a devil itself.

Threats are made against the ship. With Sammy imprisoned for a crime he may or may not have committed, it falls to his bodyguard and friend Arent Hayes and Sara Wessel, the rebellious wife of Batavia’s callous Governor General, to solve a series of mysteries and work out who – or what – wishes to sink the Saardam.

I thought perhaps that Pipps and Hayes were a little too reminiscent of Holmes and Watson at first (not physically, of course), but Arent Hayes is a deep and complex character and, with Pipps largely stuck in his cell this was a similarity that didn’t distract for long.

Sara is a particularly interesting character as well, and a great example of how one can create a layered, strong-minded woman within the confines of historical norms. Yes, she is the property of her husband, treated as a trophy and given very little liberty, but she refuses to be cowed, and risks a great deal to protect what matters to her.

In The Devil and the Dark Water Stuart Turton has created a compelling mystery and a grim mythology to accompany it. I’m not going to give away whether or not it turns out that the supernatural is responsible for the happenings on board the Saardam, but half way through the book I realised I didn’t care either way, because the mystery was intriguing and therefore I wanted a clever, corporeal explanation, but also the story of Old Tom was so delightfully chilling that I wanted it to be true as well.

This is a locked room mystery set aboard a ship, and the Saardam, a vessel belonging to the Dutch East India Trading Company, is brought to life in vivid detail. There were so many great historical details woven in with the narrative, it truly feels like you’re on board. Which, given the circumstances and the rather grisly nature of most of the characters, only adds to the growing sense of tension.

I’ve always been jealous of readers who can ‘devour’ books. I love reading, but I don’t have that kind of intensity of focus. My usual experience of reading a book is that I power through the first quarter or third, my reading pace slows during the middle, and then picks up in the last act as the climax approaches.

I mention this because The Devil and the Dark Water elicited that final burst of attention much sooner than most books. I certainly did devour the final third of this book.

The pacing throughout is fantastic – an engrossing slow-burn start in which the dread begins to build, before the pace picks up considerably in the second half and then, like a spark to gunpowder – boom – a packed climax full of twists and turns.

Jumping heads can lead to headaches…

The issues I have with the book are minor. I struggled to keep track of the passage of time because a lot happens and there are multiple viewpoint jumps. Sometimes characters would refer to a major event from earlier in the book as ‘yesterday’ and there was me thinking days or even weeks must have passed.

Also occasionally the total omniscience of the narrator made things a bit confusing, as the scene would be told almost entirely from one character’s perspective but then pierce the inner thoughts of another character out of the blue for a single paragraph or so.

The ending left me in two minds, and there’s no way I can elaborate without delivering major spoilers. It’s interesting and inventive, but… well, spoilers.

Ultimately, this is a fantastic book, once again packed full of inventive genre mash-ups, deep and varied characters, and a compelling mystery. I wouldn’t say it’s as good as Turton’s debut, only because the ending of 7 Deaths did what is virtually impossible – when the reality of the situation was revealed the truth was as compelling as the mystery had been. It’s usually very difficult to fill in the blanks of a premise like that with something more satisfying than what the reader was imagining.

Perhaps with The Devil and the Dark Water the mystery was slightly more intriguing than the explanation, but overall it’s one hell of a good book.

1 thought on “The Devil and the Dark Water: Stuart Turton delivers one hell of a follow up”