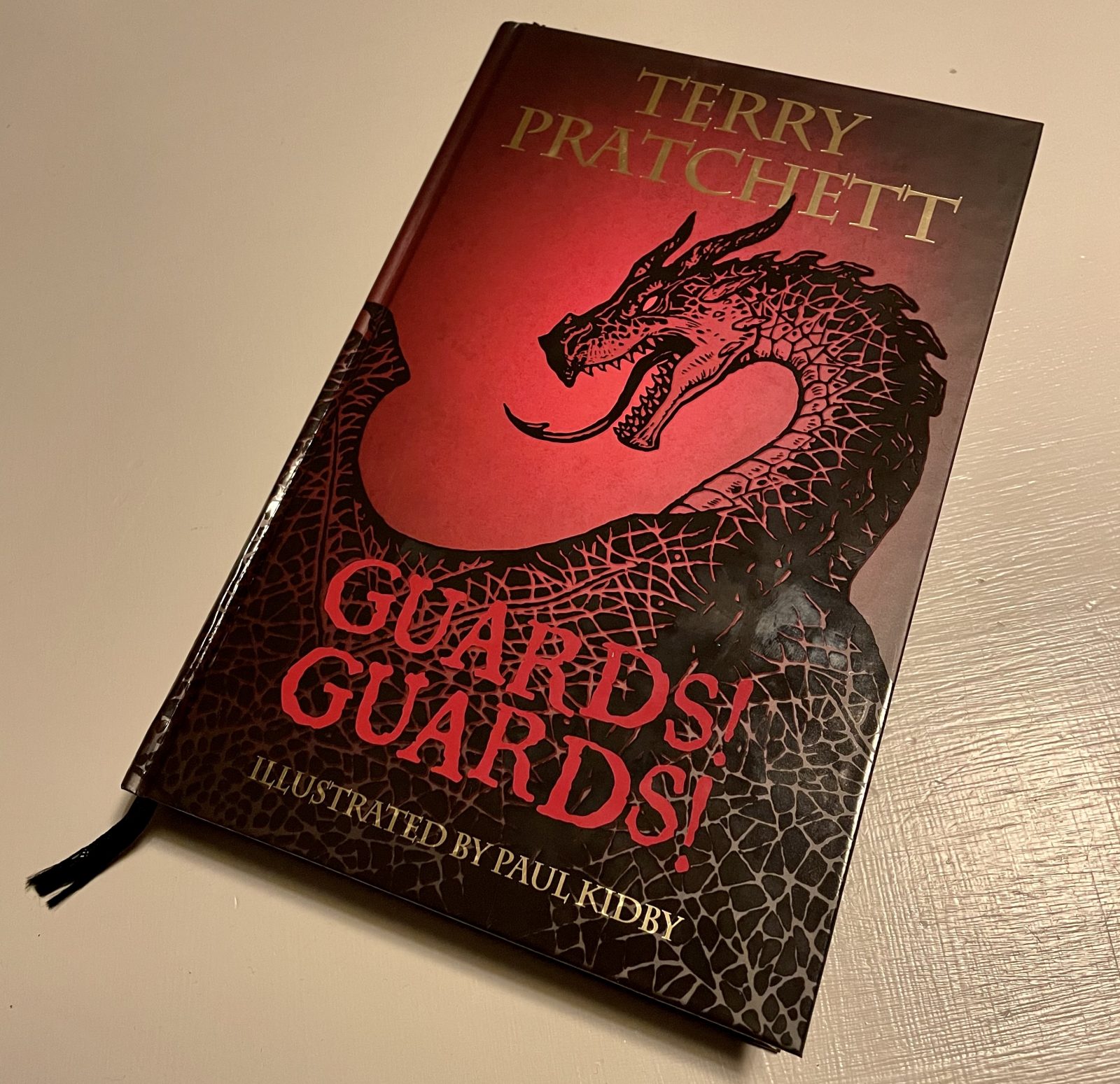 I feel like I’ve fallen at the first hurdle of this book blogging malarkey. The formula is simple, right? Read book, write down thoughts, publish thoughts (after making sure they are coherent).

It’s so straightforward. All you need is thoughts. And it’s impossible to read a book without having thoughts of some kind, even if those thoughts are ‘I’d like to stop reading this now’, or, ‘Are there any crisps?’

And yet, here I am, once again struggling to articulate my thoughts on a book I should be able to gush over. As I say, falling at the first hurdle. Like a firefighter who connects the hose to the petrol tank instead of the water tank.

Guards! Guards! A review… of my lack of review

About mid-way through last year it was announced that a new illustrated special edition of Sir Terry Pratchett’s Guards! Guards! was to be released in November.

I counted down the weeks until my copy would arrive, and dived straight in when it did, abandoning the book I was halfway through at the time to do so.

Do you ever just look up in the middle of reading a book and realise, ‘I’m having a great time’? Not because anything has happened in the narrative at that particular moment, but just because you realise how immersed in the story and the characters you’ve become.

You needn’t be cackling at a joke, made breathless by the wonder of realms so daringly imagined, aghast at a tragedy that has befallen the main character, nor stunned by a twist you didn’t see coming.

Sometimes, for no particular reason, you’re having an even better time reading than you usually do. You’re just revelling in the use of language, the construction of the sentences, the look of the words on the page.

This was one of those books for me. It’s as impressive on the inside as it is on the outside.

So, given all that, why was it that when I sat down to write a review of the book, I just didn’t know what to say? Why was it that I couldn’t pinpoint what it was I loved, or at least, that I could t describe any of it in detail?

Why, in the three-or-so months since I finished it, have I still yet to write a review of Guards! Guards!?

When your inner critic is on autopilot

I have A Theory. I’ve read about 20 of the Discworld books so far, including, as I’m sure you can guess given that I’ve said they are my favourite, several of the City Watch books.

I’m quite familiar with the world, the characters, the fantastically skewed and yet somehow entirely sensible logic of the Disc. I’ve spent a lot of time with Vimes, Lady Sybil, Colon, Nobby, Carrot, Angua, and Cheery.

And that, right there, might be the ‘problem’. I’m a Discworld fan; this is a Discworld novel. Perhaps I find it hard to explain just how awesome a lot of things in this book are because I’m so used to them I can’t find the words.

It’s like knowing exactly how many steps are in the staircase in your house. You don’t need to know, because your acknowledgement of the fact has no impact upon their ability to help you get from one floor to another (unless there is some kind of life-or-death Python-esque quiz three steps before the landing, that is).

I’ve been lucky enough to visit the Disc so many times that I just intuitively know how brilliant the world, its rules, and the characters that inhabit it are. I’ve lost the ability to communicate those things. Maybe my brain has become desensitised to it in a way.

For me, the awesomeness of Discworld has become the baseline. A book can be a good Discworld book, or a not-so-good one (I haven’t read a bad one yet, but some aren’t as strong as others). That’s all I’ve ever really needed to think about for quite a while. 20 books in is a bit late to ask myself ‘Why do I like these?’

That process has become automatic. Think of the last time you heard that your favourite author was about to release a new book. Did you, seconds after getting excited, ask yourself questions like, ‘But why am I excited’, or ‘Why am I even a fan of this person’? Probably not.

Even I don’t posses enough self-doubt to hear about book six in a series and immediately have to revisit my love of books one through five from a critical standpoint, footnotes and references included.

It’s a bit like that classic, much hated, interview question: ‘tell me about yourself’. Most of us struggle. Why? It’s the topic about which we are, without question, the subject matter experts. No one else can know us better, and there isn’t really a wrong answer. But the words often won’t come.

I’m still struggling to put my bio together on this blog. But the reason we struggle is because we can’t see these things is because we’re so used to them that they become invisible. A bit like how you can always see your nose, but your brain essentially Photoshops it out of your vision.

Put simply, I know on a deep level why I enjoyed this book. It hits the same notes as many other Discworld novels. Many of its ideas, and the things that make it special, are firmly entrenched in my mind. I don’t need to consciously process as much of the information as I would if I were new to Discworld.

And that, I believe, is the reason why I still haven’t been able to write a review of Guards! Guards! Because the review is just this: the book is great – talk to my subconscious if you want more details.