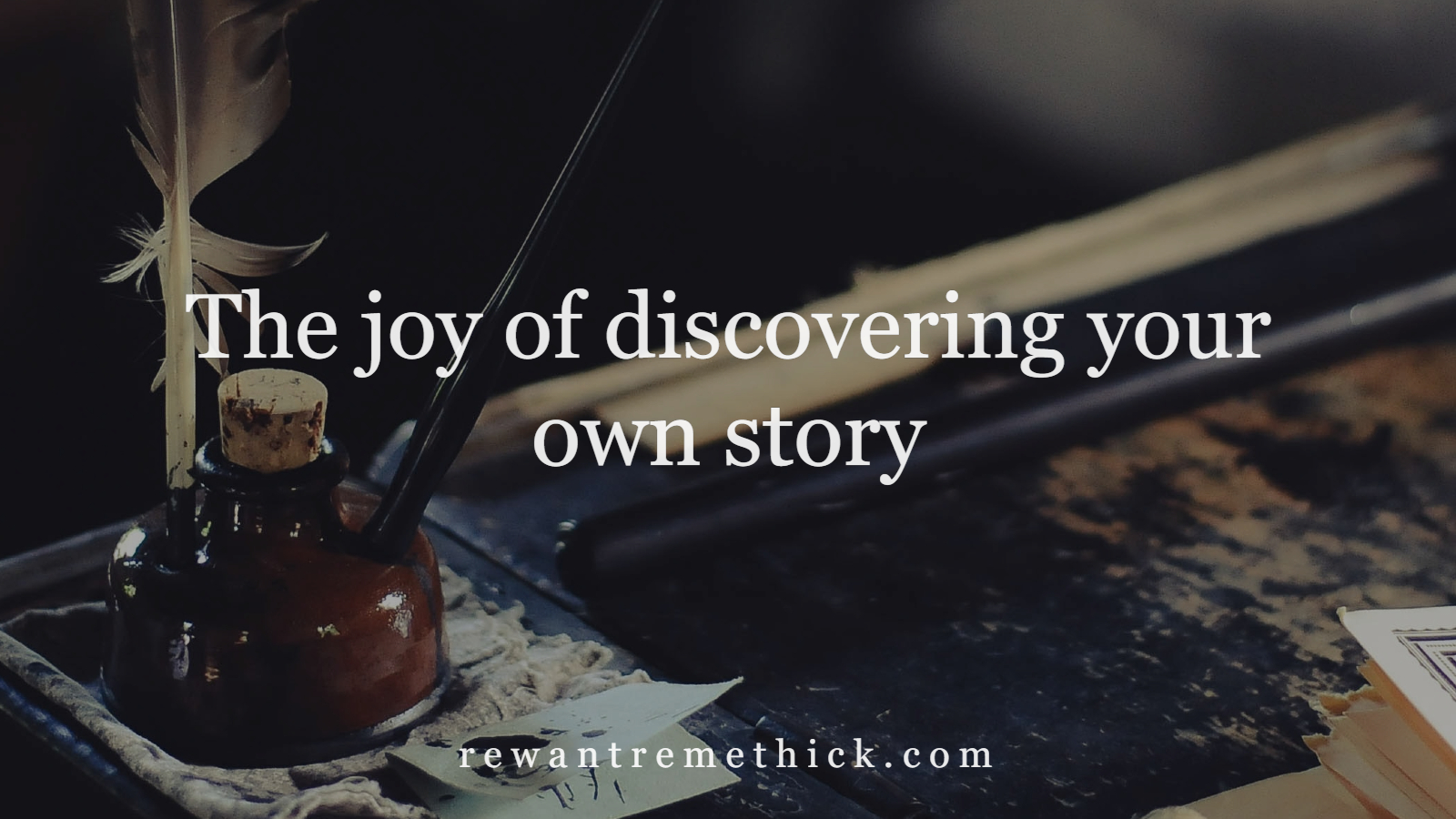 Today I wanted to talk about one of my favourite things that happens during the drafting stage of writing a novel. I have three book projects currently on the go, each in different stages of completion. The book I’m writing a first draft of is the one that is commanding most of my focus.

This is the first time I’ve tried to write out the book since I gave the plot a drastic overhaul last year. Everything feels very new, and I’m discovering a lot about the story and the characters along the way.

One of my absolute favourite things about the drafting process is coming up with an idea that not only solves an immediate problem in the scene or chapter I am currently writing, but also, when I sit and think about it, helps to explain things that happen later on in the book.

I don’t know what’s going to happen either

If you’ve never written a book before you might be surprised to know that authors often have that same feeling of discovery about their own work as they are writing it that you do when you read it. Sometimes we have to connect the dots on our own stories to draw new conclusions.

Take my second work-in-progress, for instance. A simple offhand observation made by the main character pushed the story off on a completely different direction, significantly changing (and improving) the plot.

Why it takes me a long time to write a book

As an aside, this is one of the reasons why I feel that even if I become a self published author I am never going to be the kind of writer who puts out multiple books every year. I need the space and the time to allow the story to unfold.

Sometimes my first attempt can be quite obvious, and it is only later as I explore the story and start to redraft, and think critically about what I have written, that I see new paths the story could take.

This means a lot more work rewriting, but I would rather do this and create a story with depth and nuance than publish something that was more akin to an edited first draft, which didn’t fulfil the true potential of the idea and the characters.

Staying motivated on a long project

I was reminded of this love of the writerly epiphany after kicking around some ideas to improve the first chapter of my current work in progress. I’m about 65,000 words into what’s shaping up to be a draft of 175,000 words when completed.

This is a long project and I was feeling the need for a bit of short term gratification in one form or another. While flicking through my emails I found a competition for ‘best opening of a novel’, and thought this might be a good way to get some encouragement. I’m actually not planning on entering this because I hope to win, although obviously that would be great. I am actually entering this because, for an additional fee, the judges will provide feedback on your submission.

I thought it would help to get some encouraging words about the book and also give me something to think about when I get around to editing it again, once the draft is completed.

But of course I don’t just want to send off any old rubbish. It is a competition, after all, so I might as well do my best and have a proper crack at winning. I also don’t want to waste the judge’s feedback on problems I can easily fix myself. I want to get some valuable insight that will inform me going forwards.

So I read through the opening chapter, which is only about three pages long – luckily this is the maximum length allowed for the competition. It is a first draft, so you wouldn’t expect it to be magical, but I still felt it was missing something. I thought that it wasn’t really saying much, even though it establishes something important.

Looking to the greats for inspiration

To get some inspiration, I turned to the Kindle store and decided to download a highly successful fantasy novel and read its first chapter from a critical eye to see what insights I could glean as to how a great opening should work. I wanted to see what my opening was missing compared to it.

I could clearly see from these notes some large gaps in my own writing. That thing I felt was missing turned out to be the conflict. The main character is introduced in the middle of a dramatic scenario, but she has no particular agenda at that point in time. Something has gone wrong and she’s angry about it, but there’s no action for her to take in that moment and she isn’t in any danger.

I was also surprised to find that the opening chapter of Dragon Keeper contains a lot of backstory. And, while I felt that there was perhaps a bit too much exposition, I spent a little while thinking about why this didn’t feel like an info-dump, despite how much of the scenario we are given in the first few pages of the novel.

I concluded that the writing remains engaging, and we are happy to consume all this information, because Hobb very skilfully keeps a thread of tension and peril running throughout the narrative, even when filling in information or providing context. You never forget what is at stake for the serpents as they try to make their way to the cocooning grounds, even when being given an overview of their journey so far.

Applying what I’d learned to my writing

So I came away with two key ideas. The first was that I needed to add in a conflict straightaway for my main character to face. If I’m honest, I think this is probably something I struggle with in general when it comes to novels. Something big and exciting is on the way, but it takes me a little while to get there. My other work in progress has the same issue – I have known about this one for a while.

The second is that I can actually add a lot more information to my opening chapter, as long as I’m careful about how I do it. I can give the reader a much fuller picture of the situation my main character is in and what led them to that point without automatically falling into the trap of over-exposition.

But here comes the epiphany part. In trying to figure out how to add this action and this conflict and explanation into the chapter I hit upon a slightly different way for the events to unfold. The city is in danger, but the cause is slightly different now.

What is great about this is that it adds some extra weight of logic to events that happen later in the book. It gives one of the characters great inspiration to try something that she does –  something that is vital to the story. It is not that she currently doesn’t have a good enough motivation doing it, but it’s always so much better if developments in the book have been seeded earlier on. It provides a much nicer, more natural flow to the narrative.

I think whatever you can do to minimise the feeling of coincidence in a novel helps to make the story so much more believable. Coincidences happen in real life a hell of a lot, but readers tend to have more exacting standards. And that’s fair enough, as it is too easy as a writer to fall back on a coincidence to get you out of tight corner.

One change leads to many improvements

So my idea to change the opening chapter has inspired a new scene that brings two of the main characters together earlier on in the book, adds weight to the decision of another character to perform an action that is vital to the story, and also gives the main character a stronger and more logical reason to take a particular course of action later in the book, which places another character exactly where they need to be to continue to play a role in the story.

All of these ideas quickly followed on from one another after I’d written some notes about how to change the first chapter. The inspiration struck fast and the ideas came in quick succession. It’s a delightful feeling to be creating something in real time, to have it unfold and improve before your eyes.

When you start editing something it is a very different sensation. You sit there agonising over sometimes a single word. You’re not seeing the bigger picture anymore, because you are too wrapped up in arguing with yourself over whether two clauses should be joined by comma, a semi-comma, or a colon.

Don’t get me wrong, this stage of the process is also highly enjoyable, but for different reasons than when you are drafting. When you’re editing there is a satisfaction with making it through a sentence, paragraph, or a chapter and feeling like you have made it the best it can possibly be. But when you’re in the early stages of writing the book, there is still so much of your story that you are yet to uncover.

And that’s a lot of fun. You are getting to see your story through fresh eyes, in the same way that, you hope, a reader will one day discover it when it is published. It is a chance to be impressed at your creativity, to pat yourself on the back for a clever solution or an unusual plot twist, before the weight of editing and the self-doubt begin to creep in.

Perhaps that is why it’s one of my favourite things about drafting. For just a few seconds, I get to remember why am so excited about writing this story, before the questions and the worry begin to seep in.