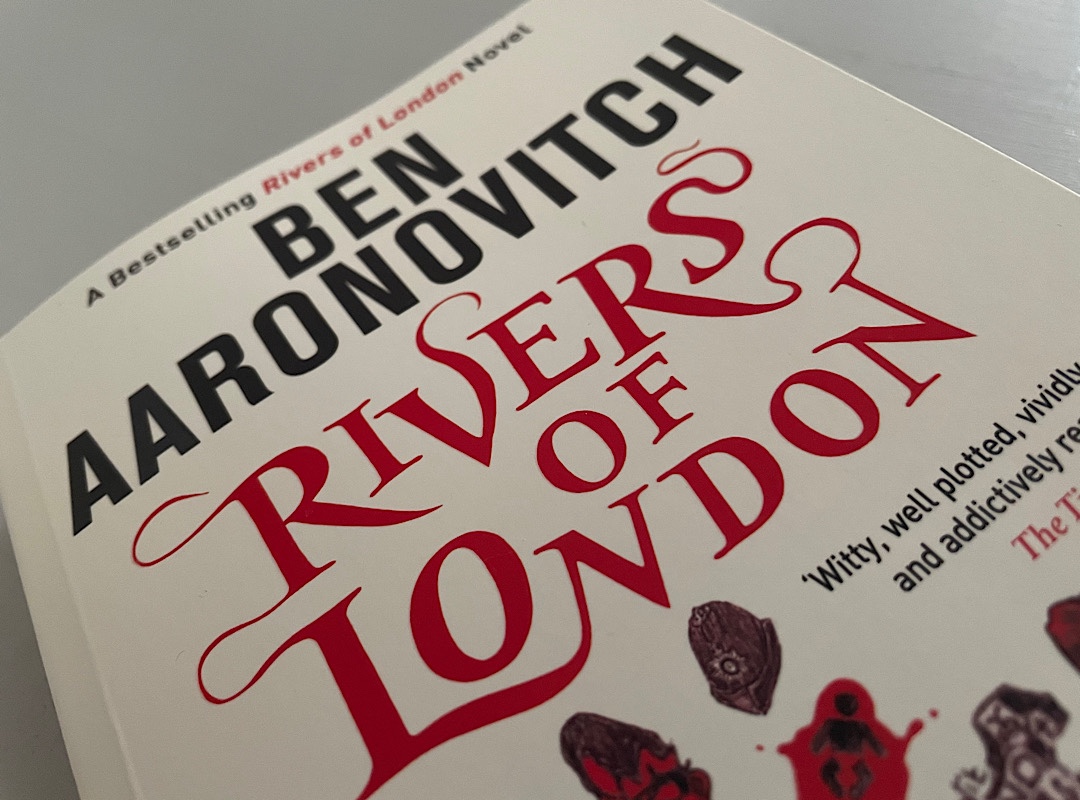 A quick warning: this review doesn’t exactly contain spoilers, but it does contain a couple of references to how and when certain aspects of the plot unfold. It’s up to you if you consider that to be enough to constitute a spoiler.

I have never really been a fan of the five-star rating system for books, and Rivers of London by Ben Aaronovitch is a perfect example of why. The novel introduces us to Peter Grant, a trainee constable (and soon-to-be apprentice wizard) with the Metropolitan Police Service, who, after a chance encounter with a ghost at the scene of a murder, is allocated to a secret department of the Met that specialises in supernatural crime.

My response to Rivers of London can be summarised thusly (yeah, I totally just used ‘thusly’):

1. It is very funny and the characterisation is brilliant

2. Some aspects of the plot are highly inventive and very entertaining, others are underwhelming

3. As soon as I finished this book I was desperate to read the next one (and indeed I’ve now finished it)

Overall, I have to describe my experience reading Rivers of London as “mixed”. But that doesn’t really do the book justice. I’ve already finished Moon Over Soho, the second book in the series, and it’s not like me to just plough into a follow-up like that. So how does that work?

There is a lot to like in Rivers of London. Peter Grant is a very interesting character, with an interesting cultural background, and a delightfully cynical streak that means this first person narrative is packed full of wry observations about London, policing, race, and the general public.

I knew I was going to be in for a good time reading this book when the first line made me laugh:

It started at one thirty on a cold Tuesday morning in January when Martin Turner, street performer and, in his own words, apprentice gigolo, tripped over a body in front of the East Portico of St Paul’s at Convent Garden.

Peter, having discovered that magic is real, goes to live in the The Folly, an enormous yet empty Georgian building that serves as the headquarters for his department. What’s particularly interesting is the amount of research Aaronovitch has done into the workings, structure, and hierarchy of the Met. He’s managed to integrate the existence of a secretive, paranormal department into the London police force in a very logical way.

Grant shares The Folly with his superior, Detective Inspector Thomas Nightingale, Toby, a small dog who belonged to a murder victim, and Molly, the fanged, silent housekeeper of indeterminate species. It is here that Grant begins to learn about England’s supernatural history, and starts his journey as an apprentice wizard.

A scientific approach to magic

Urban fantasy books have a unique challenge. Unlike genres such as epic fantasy, where it is understood that lots of the basic rules of the world may be different, paranormal novels have to work out how to justify the existence of things like magic and vampires. Some authors go for the approach of simply treating it as pedestrian: these things exist, deal with it. Others go for the same kind of approach as writers of ‘hard’ science fiction, which, you may be disappointed to learn, isn’t erotica set in space.

Aaronovitch has opted for the second (detail, that is, not space erotica). I will admit that, when Nightingale began naming spells for the first time, I thought I wasn’t going to like the magic system. I tend not to like overly-prescriptive speculative fiction. If it’s not done right it actually lessons the believability rather than heightening it. It’s like looking for the secret in the magic trick; if you spend too long thinking about it you are often reminded of the fact it’s not real, rather than convinced that it is.

I thought formalising the magic system would be too “Harry Potter”. However, Peter’s character has a scientific mind, having studied the sciences in college before entering the police force, and the way he tries to apply this knowledge to the world of the supernatural is one of the things that makes this book particularly interesting.

The author is walking a risky path when deciding to try and make magic scientific. It’s usually one of those things that you hope the audience doesn’t look at too closely, otherwise they’re just reminded that it’s make-believe. But he pulls it off with aplomb.

Unsurprisingly, the crimes in this book revolve around the supernatural. There are actually two plot lines, and this is where Rivers of London begins to fall apart slightly.

The first plot line, and the one that accidentally introduces Constable Grant to the otherworldly, involves members of the public committing seemingly random acts of violence and then having their faces falling off. This plot line, when it is revealed exactly what is happening, is fantastic. It is a great concept and the visuals of these people with their transformed faces committing these acts of rage is iconic.

The second plot line, however, just doesn’t really seem to go anywhere. It is interesting to note that the second plot line, which is about the start of a turf war between Mother Thames and Father Thames, the gods of the river and their many children (tributaries), is what this book is actually named after in the UK version, whereas the US title, Midnight Riot, refers to the other plot line.

Now, I’ll admit that a turf war between various gods who rule over different parts of the same river sounds pretty interesting. But Grant’s task is to avoid the turf war, and so he visits a few vaguely mystical people, has a few conversations, and ultimately (I feel) plucks a solution out of thin air. In fact, the resolution to this plot line is basically the book’s epilogue.

There are a couple of instances where aspects of this plot cross over into the other story, but to me the connections are superficial. It just feels like Aaronovitch needed either a problem or a solution to a problem at certain points in the narrative, either to stymie Grant’s investigation into the murders and violence, or to help move it along. And the river gods help to do this.

Too much time spent on set up for a future payoff?

I have seen this series of books, which I think is up to about eight volumes now, referred to as the Rivers of London series. I am not sure if this is just because of the title of the first book, or whether it is because the events started in the first book are part of an ongoing arc that spans the entire series.

If it is the latter then this aspect of the plot in Rivers of London makes more sense, but I still don’t think it had enough purpose on its own to justify being included. For me, after an interesting beginning, the book did sag a bit around the 75 page mark, which I think is where the rivers plot line was introduced. We had about a quarter of the book focusing on these grizzly assaults and murders and then suddenly the focus shifts to the dispute between the rivers.

So, overall, Rivers of London feels like two separate short stories being told in parallel. I don’t necessarily mind that as a premise, as long as each of the stories is entirely worthy of inclusion. But I just don’t think the rivers part of the story really contributed that much.

So what kept me hooked?

I have to admit to being somewhat surprised to get to the end of the novel and realise I was desperate to dive in to the next volume. Considering my view on the book was undoubtedly mixed, and by page 75 I was expecting to be very disappointed, despite a strong beginning, why was I acting as though I had just read a five-star book and couldn’t wait to continue the series?

I think what it comes down to, and this has made me think a bit about the nature of stories, is that the character and the premise (as in, the half of the plot that I really enjoyed) was so interesting that I felt what had let the book down was more the way they had been used (read: underused), rather than what they were.

Sometimes you read a book and the premise is bad. It is unbelievable, underdeveloped, or just not interesting. That is not the case with Rivers of London. It had a great cast of characters, it is very funny, and the plot is very imaginative. So, while there is lots about this first instalment that didn’t grip me, I still finished the novel confident that Ben Aaronovitch is an imaginative and entertaining writer who is more than capable of telling some fantastic stories, and has already assembled all the ingredients necessary to do so.

And that’s why I was desperate to start Moon Over Soho, because I could see the potential that was present in Rivers of London, and can’t wait to see what happens when it is finally realised.

All of which is pretty hard to summarise with a few stars.