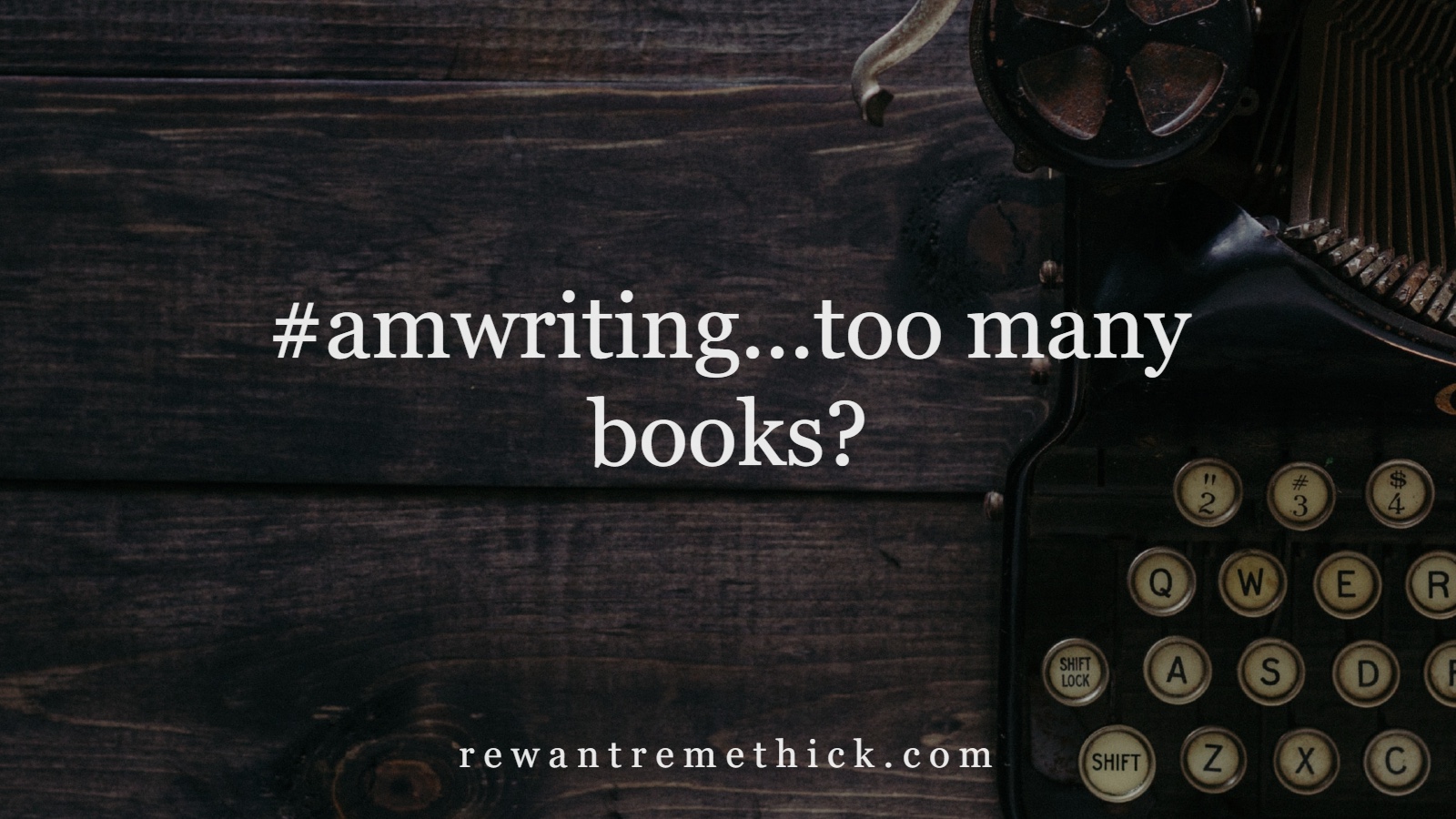 Not so long ago I was regaling my largely-empty corner of the internet with the story of my 17-year long work in progress. It’s one of three major projects I’ve been chipping away at for a long time, making as much progress as a prisoner trying to tunnel to freedom using only the little plastic forks you sometimes get with supermarket salad pots.

Now I’m here to announce that I have started working on a brand new project.

The author in me has something to prove

Which seems silly, right? It’s like a gambler telling you they can quit whenever they feel like it. ‘It’s only a few thousand words,’ I say, putting a half-chewed pencil into an ashtray and shaking a fresh one out of the packet. ‘OK, so I planned a chapter or two. But I’m in control. I could give up if I wanted to.’

There is, I believe, method in this madness. It’s a calculated move rather than an action taken on impulse. (Returning a mistakenly-purchased book and then spending the refund and another 20% more on different books is a good example of an impulse, which I, er, totally pulled out of thin air).

At the end of my post about my ‘Novel of Theseus’ I laid out some rules I was planning to follow to make sure the project got done. They were all around beating my perfectionism and taking the risk of sending my book out into the wide world, like a proud robin who just has to accept that their chicks have to leave the nest, even if there’s a small chance they might fly straight into a lamppost when they do.

And while I think those are good rules, one thing was still bothering me.

Can I actually write a book in a ‘reasonable’ timeframe?

It’s an inescapable fact that even if I do get some of these books out the door in the next couple of years they will still have taken me a decade or even two to finish. That makes George R. R. Martin look like Bruce Almighty in that scene where he’s answering emails.

If I’m ever going to have any kind of future as a published author, either traditionally or self-published, I need to pick up the pace a bit. Anything faster than one book per millennia would be a good start.

My new project is a perfectionism-crushing, doubt-bashing challenge: research, plot and write a book from scratch to finished (i.e. out in the world for actual humans to read) in no longer than one year. The idea is based upon a loose concept I’ve had rattling around in my head for a while, but for now all I’ll say is it’s a bit like Rivers of London, but set in Cornwall and drawing heavily on local mythology.

It worked once, but will it work again?

So what exactly is the challenge? I’m aiming for a book of around 60,000 words. It’s substantial enough for me to feel like it’s an actual novel. I know there are self-published writers out there who would call 40,000 words a novel, but for me that’s a bit slim. There’s nothing wrong with a story being that length, but that’s not what I’m trying to write.

60,000 words is good number for a couple of reasons. In my life I have actually completed and used three books in under a year each, and they were all around this length. So I know I can do it.

But hang on, I hear you cry. What’s the point of this challenge if you already know you can do it? Well, there are a few points.

First of all, it’s been a good few years since I did that. And back when I did I was working freelance and didn’t have a mortgage or two young kids to worry about. In other words, I had Free Time, a concept that I’m now struggling to believe actually exists. For instance, I’m writing this in between putting the kids to bed and loading the dishwasher, because my daughter is chatting away to herself and I’m waiting to see if she actually goes to sleep or decides to start screaming for us to come up.

I want to know if I can make it work under these conditions. Knowing I could write a book quickly back when I was 23 is like knowing I could fit in jeans with a 32 inch waist when I was 23. The knowledge is as useful as shouting ‘Lookout!’ at a man who is being loaded into an ambulance several hours after being sat on by an angry horse.

Having the confidence to put my work out there, even when there’s no pressure to

The second big reason is that back then I had external motivations for getting those books finished, or getting them out into the world. Two of them were ghostwritten, and one of them was only written for fun as part of National Novel Writing Month, then someone found out about it and encouraged me to publish it myself.

In both cases there was a clear guiding hand pushing me onwards. This time I need to make those big decisions myself. I need to decide on my own that the book is good enough and make the leap of putting it out into the world on my own terms. Being unable to do that is one of the reasons my other projects have languished for so long.

OK, you say. But that doesn’t explain why you don’t just say to yourself that you’ll go back and use one of those projects as the starting point for this challenge. Couldn’t you just set yourself the goal of finishing one of them in a year?

Again, there are a few reasons. First up, my works in progress are much bigger books, all between 150,000 and 200,000 words at the last estimate. Finishing one of those in a year is too much of a challenge. The tricky part is finding the right balance between being enough of a test that it requires me to knuckle down and keep going, but not such a task that I become overwhelmed and give up. My existing projects would definitely fall into the latter category.

The second reason is because I want to complete the process from start to finish. I want the joy of immersing myself in a new project and starting from scratch. And because the point here is to prove to myself I can come up with and finish something new. What I’m worried about is that I’m using up my store of ideas on my current projects; I haven’t had to think of a completely fresh idea for quite a few years now. Can I still do it?

Writing something close to home

I think, at some point long ago in this post, I started talking about the ways in which I’m going to make this easy for myself. The second way is that I’m creating something that utilises as much of my experiences and knowledge as I can.

That means setting the story in Cornwall, because it’s where I’ve spent virtually my entire life. It’s a supernatural murder mystery that starts at a landmark not too far from where I live. During my childhood and teenage years I walked many of the different landscapes in Cornwall and I’ll weave those places into this, or future, books too. I’m putting all the facts and snippets I learned about Cornish mythology growing up to good use as well.

Essentially I’ve decided to write something that utilises things I have close to hand, like a granny who hears a noise downstairs and leaps out to confront the intruder with a ball of purple alpaca wool and a half-finished turtleneck.

Now all I have to do is…write another book

All of this should, I hope, create the conditions required to actually complete the book. And once it’s done I need to make sure it is available somewhere for people to read. I may decide to self-publish it and make it available to buy. Or maybe I’ll just give it away for free.

On paper this all seems quite achievable. The word count isn’t a problem; I wrote 84,000 words on various projects last year. And despite my fears, coming up with an idea wasn’t an issue either, as I’ve already got most of the plot sorted since setting myself this challenge, although things are bound to change as I uncover new ideas during the research phase.

The difficulty will be overcoming the writing goblins in my head that always want to do one more version of the plot, or one more redraft. That’s why I need your help to keep me accountable – if I have some followers on this blog then I know people are watching to see how I’m getting on. Do us a favour and give that follow button a hit.

Cover photo and corresponding social media tile is based on a photo by Patrick Fore on Unsplash.

1 thought on “amwriting…too many books?”