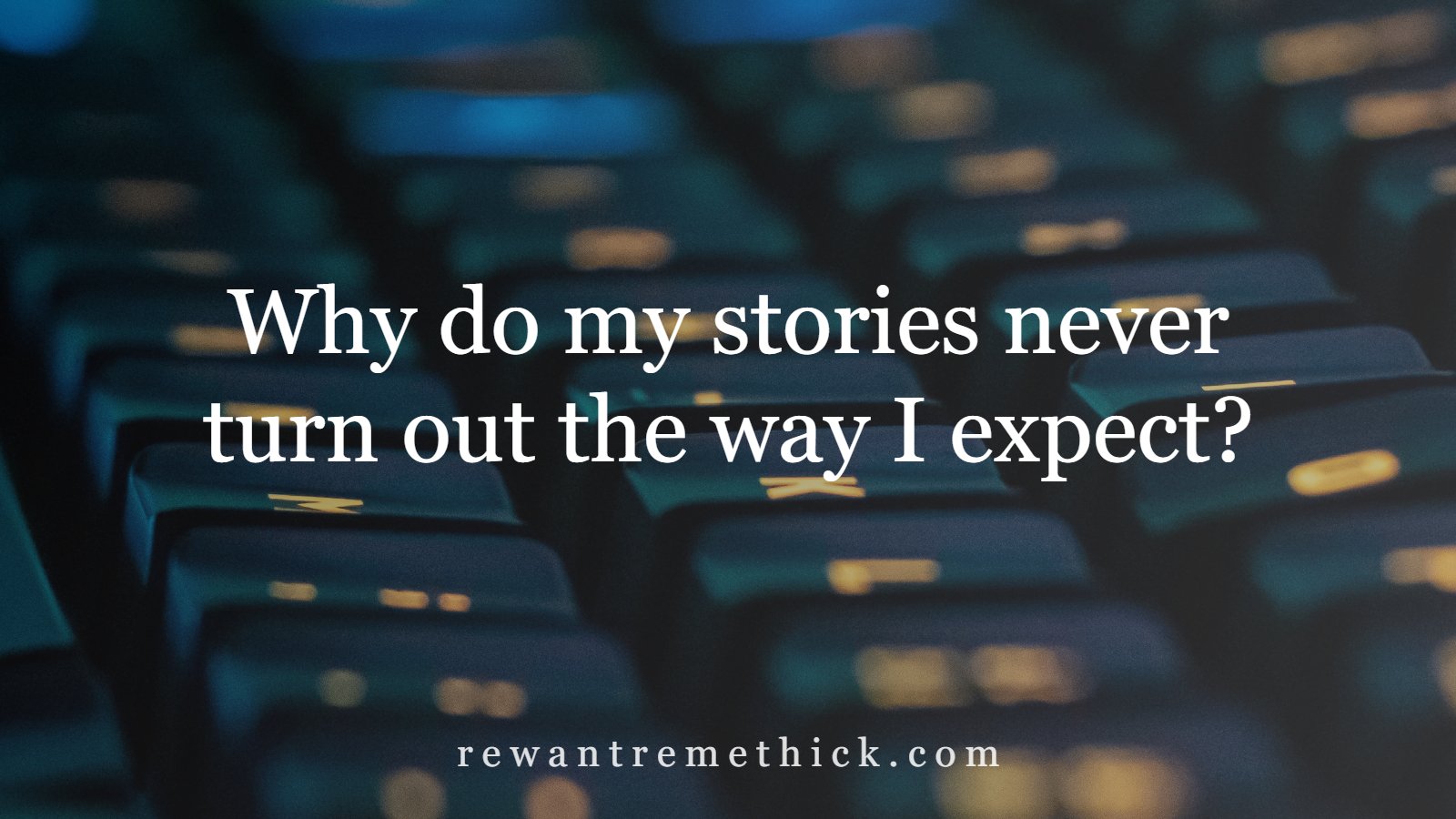 I’m writing a lot of things at the moment, but something that has been consistently true of my work is that my projects never end up being about what I think they are going to be about.

I think of myself as having a cinematic imagination. I’m not using ‘cinematic’ as a pejorative, just that I have a very visual way of conceptualising things and I often do it complete with fancy camera angles in mind. Sometimes there are even lens flares.

Maybe one day I’ll realise my real problem is that I’m a screenwriter trying to write books. I’m not saying that’s true, just that I’m not sure I’d be surprised if it turned out to be.

Or perhaps I just need to work harder on my writing style so that the visual nature of my ideas translates properly on the page.

The point is, I have a very strong mental picture of the story I’m trying to tell. Sometimes the stories live in my head for years before I actually get around to committing them to the page, and I play them over and over again like my favourite films. Sometimes the details change a bit, sometimes they don’t.

But inevitably they morph when the page gets involved. It’s like they’re one of those volatile elements that can only exist in a particular environment – that environment being the lovely Goldilocks conditions of my brain (which, for most of the time, is not a nurturing environment) – and as soon as they enter a different atmosphere they fizz or melt or wither or crumble into dust.

Am I missing the point?

Actually, that’s a little unfair. That basically sounds like I’m saying my ideas sound good in my head but then turn out to be rubbish when they’re written down. That’s not the case. Not necessarily, anyway.

It’s just that they often end up being very different to what I intended them to be. I set out to create one particular thing, and instead created another. Like if Doctor Frankenstein had tried to reanimate a corpse and instead ended up creating one of those inflatable tube-men with the long flappy arms that Americans seem to like putting outside businesses.  I end up feeling like I didn’t actually tell the story I was intending to tell.

Building out a story means changing its appearance

I guess this isn’t surprising when you’re talking about novels. Obviously I’m not walking around with entire books in my head, just the outlines, key set pieces and major characters. When it comes to writing them I have to fill in the gaps and expand upon the ‘source material’. I’m putting flesh on the skeleton, so it’s no surprise the end product looks different. No one could recognise a person by their skeleton.  No one will ever see a skeleton and go, ‘Oh my god – it’s Frank.’

And sometimes these stories really do change for the better. The second book in my supernatural detective noir comedy (how many genres is too many?) went in a totally different direction after what was supposed to be an offhand observation from the main character inspired a radically different plot. That was definitely better than what I’d originally had in mind.

Other times, the story just feels different. It achieves something other than what I intended to. Which is fine. Many great things have been invented by accident. Percy Spencer discovered the ability of high-powered microwave beams to heat food when working with a radar set and observing that the chocolate bar in his pocket was melting.

My books will never help people heat up soup, but they too could be all the more impactful because of the new theme or plot or subtext I stumbled across while trying to achieve something different.